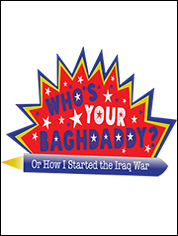 Inspired by a true story, Who’s Your Baghdaddy? is a new musical comedy, presented as a support group for people who started the Iraq War. Dark, boisterous and irreverent, the story follows a handful of mid-level spies whose vanity and office politics contributed to the worst intelligence blunder in modern history.

It all begins at the Frankfurt airport, when the only political-asylum specialist available who speaks Arabic is a nervous junior detective on the job for less than a week. Sure, sure, he can handle the talkative Iraqi defector. In “Who’s Your Baghdaddy? Or How I Started the Iraq War,” an important, cunning, rock-solid musical comedy with a terrible title, the mistakes start there. A well-meaning C.I.A. employee confuses credibility and reliability — words that have very different meanings, we learn, among intelligence people — in a translation. Things like that just keep happening. I don’t know how the Iraq war started, but this is the most plausible explanation so far. If you ever thought about the whole thing and wondered, “How could people be so stupid?,” here’s how: fear of being wrong, fear of admitting being wrong, the temptation of a life-changing promotion and other helpless, thoroughly plausible acts of ego.