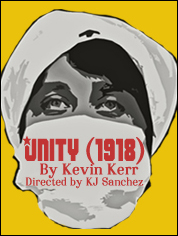 In the fall of 1918, a world ravaged by World War I was blindsided by a mysterious and deadly plague. The “Spanish Flu” cut down not only the very young and very old, but people in the prime of their lives, killing far more than had been killed in battle during the war. The small town of Unity takes drastic action. The town is under quarantine and the borders are sealed – no one can enter, no one can leave. Even mail from overseas is burned. When the disease descends despite their precautions, the town-folk of Unity have only each other to turn to – in terror and in hope and, amidst this apocalyptic landscape, when death is knocking at the door, perhaps even in love. Part Gothic romance, part pandemic horror story, and infused with biting dark humor, Kevin Kerr’s UNITY (1918) (winner of the Canadian Governor General’s Award for Drama) is an epic chronicle of this remarkable chapter of human history.

So much for genteel images of the 1918 Spanish flu. Kevin Kerr’s “Unity (1918)” can make any “Upstairs Downstairs” fan forget the tasteful expiration of James Bellamy’s febrile young wife in a grand bedroom at Eaton Place. “Unity,” having its United States premiere at the Gene Frankel Theater, is much more like a horror story. The flu killed an estimated 50 million people worldwide in less than two years. (AIDS has killed around 39 million, but over 34 years.) Mr. Kerr’s play focuses on Unity, a small Canadian town where life is normal at the beginning. Three sisters of marriageable age giggle over the contents of a book about sex. One sister is also preaching about the end of the world, which, she has established mathematically, will take place in 1918. Residents await the return of the town’s young men from what we now call World War I. When a young wife dies in childbirth, two telephone operators gossip about whether it’s sad — or a blessing — that the baby survived.