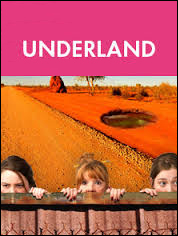 Violet and Ruth are bored as hell in their small town Australian high school, where there’s nothing but red earth, hurricane fences and the far off whirring of the quarry. But when a new teacher arrives, the borders of the town are no longer the limit of where a girl can go. If only they can escape to Melbourne or Paris or Tokyo before the sinister creature lurking at the edges of the town snatches them up and feeds them to the insatiable earth. “Underland” is a new Australian play that cracks open the desert to reveal mythic beasts, Chekhovian love triangles and big sky blues, while giving the finger to everything you thought you know about “Down Under” from Fosters’ commercials.

Anyone who has ever lived in a deadly dull town will understand why two bawdy-mouthed Australian schoolgirls dig a hole to China in Alexandra Collier’s “Underland.” It’s the only way out, they decide, from stone-quarry country. But they’re bad at geography, so the nice man who crawls out of their tunnel one day is from Tokyo. Back at school, the girls’ physical education teacher turns into a crocodile. Ms. Collier, who is Australian-born and New York-based, has created six vivid, droll characters. In Terra Nova Collective’s polished production of “Underland” at 59E59 Theaters, Mia Rovegno has directed six assertive, beautifully delineated performances. The meaning of the play, however, is swathed in enough metaphor to suffocate Samuel Beckett.