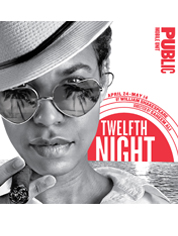 When a young shipwrecked immigrant named Viola takes a chance on the “wet foot, dry foot” policy of the mid-nineties and washes up amidst the shore of glitzy Illyria, Florida, she finds herself a stranger in a fabulously strange new land. Thinking her twin brother has drowned, Viola throws herself into a new gig as assistant to Orsino, a wealthy Floridian with a serious case of love sickness for a wealthy lady, Olivia. Having disguised herself as a boy to become Orsino’s right hand man, Viola (now Cesario) is tasked with delivering his adoring valentines. But as Viola woos in her boss’s name, she falls head over spiky heels for the man himself, while Olivia turns her affections to the intriguing young messenger boy, Cesario (also Viola). Set to the rhythms of house, Cuban and nineties beats, Saheem Ali directs this colorful comedy about the power of new people and new experiences that throw the world into beautiful disarray, and open hearts and minds to the possibility of love.

A quiet little celebration is happening over at the Public Theater, honoring 60 years of its Mobile Unit, which takes Shakespeare to the people with performances in New York City community centers, correctional facilities and shelters, and then at the Public itself. “Twelfth Night,” this spring’s play, has wrapped up its five-borough tour and is now onstage at the mother ship. In honor of the anniversary, all tickets are free. It’s a lovely gesture, but a customary ratcheting down of expectations is in order. Directed by Saheem Ali, vaguely set in coastal Florida and sprinkled with Spanish, this frantic staging does offer some amusements — chief among them, David Ryan Smith as a wonderfully prissy Malvolio, and Donnetta Lavinia Grays as a teasing, protean Feste. But it also suffers the fate of many an outreach show produced by institutional theaters, including the Public: It’s not as good as the usual fare. That’s not because of the streamlined physical design. The show does fine with unchanging overhead lighting, and the flat square (by Arnulfo Maldonado) that forms the stage is tricksy enough to transform briefly and cleverly into the roiling sea where the twins of the tale, Viola (Danaya Esperanza) and Sebastian (Sebastian Chacon), are separated before washing ashore, each assuming that the other has drowned.