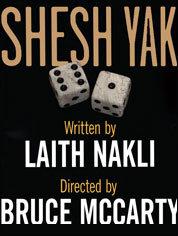 In Shesh Yak, it’s spring of 2011, five weeks into the civil uprising in Syria. Jameel, a 30-something-year-old Syrian-American writer is in his New York apartment waiting for a houseguest to arrive from DC. An older Syrian ex-patriot and a leader in the anti-Syrian government movement, Haytham, has come to New York on business. Jameel is overwhelmed with excitement to have someone of Haytham’s stature in his home and the two share stories from their younger days in Syria. An unclear tension arises, leading them into a re-examination of their lives and a revelation of how their different pasts have intertwined and forced them into choices that neither ever imagined.

Though set only four years ago, Laith Nakli’s Shesh Yak at Rattlestick Playwrights Theater is already heartbreakingly out of date. “The Syrian people will prevail,” declares Haytham (Mr. Nakli), an activist in his 50s who has come to New York to lead a rally. “The world will stand by us and there will be reform. I am sure of it.” What has happened in Syria since those first heady days of protest is the stuff of tragedy. What happens in New York in Mr. Nakli’s play — that’s mere melodrama. Haytham has arrived to spend the night at the comfortable if somewhat dingy apartment of an acquaintance, Jameel (Zarif Kabier), a writer in his 30s. Jameel seems unusually excited by Haytham’s arrival. Is this hero worship or something more sinister? Or is Jameel simply collecting material? “I write for TV,” he explains. “Mostly humanizing terrorists.” But Jameel has loftier aspirations: “I do want to write a play,” he says.