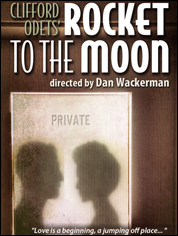 Rocket to the Moon tells the story of Dr. Ben Stark, whose marriage to Belle is buckling under the weight of constant money worries. Enter Belle’s father, Mr. Prince, a flamboyant and immensely wealthy old man who, deeply estranged from his daughter, suggests that the remedy is for Ben to have an affair with his beautiful young receptionist – Cleo Singer. In the heat of a New York summer, Cleo and Ben embark upon an affair that will transform both their lives, endangering Ben’s comfortable routine while opening him up to unimagined possibilities.

The Depression is raging, and so is the summer heat. The patients with money have left the city for the beach, and the others can’t afford to have their teeth fixed, anyway. Clifford Odets’s 1938 Rocket to the Moon — a lesser-known work from his Group Theater days — takes place in a dental office bereft of patients, a sort of purgatory whose proprietor can’t summon the will to leave it. The play’s revival by the Peccadillo Theater Company, directed by Dan Wackerman at the Theater at St. Clement’s, rewards the curiosity of anyone with an interest in Odets, but possibly not quite in the way it intends. Ben Stark (Ned Eisenberg), a middle-aged Manhattan dentist and confirmed milquetoast, dreams of a less soul-sucking life, yet lacks the courage to try to build one. It’s like the quandary the Hollywood star Charlie Castle faces in Odets’s The Big Knife, but for lower moral and material stakes. As the play begins, Ben’s wealthy father-in-law, Mr. Prince (Jonathan Hadary, amusingly nettlesome), has offered to set him up as a specialist. The proposition may be sincere, but there’s not much chance that Ben will accept it. His sour wife, Belle (Marilyn Matarrese), estranged from her father, opposes any financial risk.