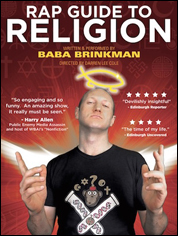 Rap Guide to Religion is a new species of theatre, part hip-hop concert, part stand up comedy, and part TED Talk, exploring one of the most heated questions of our age: what’s the point of religion? Taking a scientific approach to the question, Canadian hip-hop artist Baba Brinkman performs faith-illuminating songs inspired by the best of evolutionary and cognitive science, with examples from his own family history (Baba’s ultra-religious great-great-great-grandfather sired more than 8,000 descendants). Fresh from a 5-star run at the 2014 Edinburgh Fringe Festival, this groundbreaking new work explores the various ways and means by which religion evolves in our species, leaving audiences with a new appreciation of religion, and its critics. It’s time to eff with the ineffable.

You know what would make Baba Brinkman happy this weekend? If just one winner would get up at the Oscars and make an acceptance speech that began not with an expression of gratitude to God but with “I want to thank Charles Darwin.” Seeing Rap Guide to Religion, Mr. Brinkman’s very funny, very educational solo show, directed by Darren Lee Cole at the SoHo Playhouse, is like attending the best TED talk ever, but with musical breaks. The first few minutes, an aggressive rap number, are jolting. I have nothing against rap as an art form. I have nothing against white Canadian rappers. But I felt assaulted, even when the lyrics distinguished themselves by rhyming pagan with Carl Sagan. Luckily, most of the show is talk — smart talk — and it proved itself worthy the minute a Rick Ross rap lyric was applied to the plight of the American nonbeliever. Mr. Brinkman, who also wrote The Rap Guide to Evolution and a hip-hop Canterbury Tales, is with antireligionists like Sam Harris and Christopher Hitchens, but he focuses on why religious belief exists at all, what needs it fills and what its real effects are.