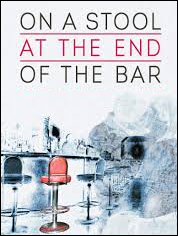 Tony and his girlfriend Chris lead a happy and quiet lifestyle with Tony’s three kids in New Jersey. But with the arrival of Chris’s brother the family is forever changed, and the true nature of love is tested by a deeply held secret in this shattering and unconventional story.

On A Stool at the End of the Bar, a new play by Robert Callely, explores the ignorance and misunderstanding that one trans-woman faces in the 1980s. Chris McCullough (Antoinette Thornes) is a suburban woman who seems to have it all — a well-paying job, a hard-working and loving husband named Tony (Timothy John Smith), and three smart kids. The three kids, named Joey (Luke Slattery), Angie (Sara Kapner), and Mario (Zachary Brod), are actually Tony’s from a previous marriage, but they’ve accepted Chris as a second mother. However, as in most suburban family dramas, there’s a devastating secret that must come out — Chris’ brother Michael (John Stanici) has come to inform his sister that their parents have recently died, leaving her $97,000. The detail that will send all the characters into turmoil is the name on the check: “Christopher Eugene McCullough, AKA Christine McCullough”. We find out that Chris was born a man, and worked as a prostitute in order to afford a sex-change operation. This being the 1980s, when attitudes towards LGBT people weren’t nearly as accepting as they are today, the characters’ reaction to this news is less than thrilled.

Lies often manage to claw their way into the light, and when the truth reveals loved ones as they really are, a familiar face can become the face of a stranger. That’s the experience of Tony DeMarco (Timothy John Smith), the working-class father who discovers a life-shattering secret about the woman he adores in Robert Callely’s On a Stool at the End of the Bar, now running at 59E59 Theaters. Though this production’s fine performances are at times muted by Michael Parva’s too timid direction, the play features an unconventional type of betrayal that makes for an engaging two hours and strikes a chord with its distinctly modern theme. What that theme is, exactly, can’t be revealed without spoiling the whole show. Suffice it to say the play takes place during the late 1980s in a modest, working-class New Jersey home (Jessica L. Parks designed the aptly detailed set). Ten years earlier, widowed father Tony met Christine McCullough (Antoinette Thornes) when she happened to sit on his stool at the end of a bar. They fell in love, and Christine soon became a loving surrogate mother to Tony’s three children, Joey (Luke Slattery), Angie (Sara Kapner), and Mario (Zachary Brod). They live together as a typical, happy family until Christine’s father dies and her brother, Michael (John Stanisci), shows up unexpectedly to settle the estate with her. While Michael is alone with Tony, who never even knew that Christine had a brother, Michael unwittingly divulges a devastating secret that upends Tony’s understanding of Christine as well as of himself, and sends the entire DeMarco family into a tailspin.

The marketing for On a Stool at the End of the Bar, the new drama by Robert Callely at 59E59 Theaters, studiously avoids giving away the pivotal fact of the play. At Sunday’s performance, the revelation of this secret provoked a smattering of nervous laughter and, from the woman in front of me, a soft, surprised “Ohhhhh!” But that moment happens early in this Directors Company production, and there’s no useful way to discuss the play without mentioning it. So, fair warning: spoiler dead ahead. Chris McCullough (Antoinette Thornes) has been with Tony DeMarco (Timothy John Smith) for a decade, and there’s still a sexy, teasing vibe between them. He’s a bit of a Neanderthal — this is late-1980s New Jersey, and the gender roles in their working-class house are neatly divided — but it’s a warm, happy home. Tony’s three teenagers love Chris as much as she loves them. The family’s tranquillity is blown to smithereens with the arrival of Chris’s long-estranged brother. He tells Tony something Chris never mentioned: Before she was Christine, she was Christopher. The play is about how much that matters and to whom: not just that Chris is transgender, but that she kept it from Tony even as she made a life with him.