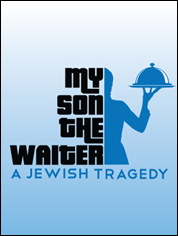 My Son the Waiter: A Jewish Tragedy is Actor/Comedian Brad Zimmerman’s hilarious and inspiring story about the grit and passion required to ‘make it’ as an artist and the sweet rewards that come from never giving up on your dream. Specifically, Brad moved to New York City and “temporarily” waited tables for 29 years, while continuing to pursue his dream of comedic acting. He never gave up and many years later, he’s opened for Joan Rivers, Brad Garrett and the famed George Carlin and now has his own touring show that is as profound as it is entertaining.

Brad Zimmerman may well have brought many of us a salad or a mac and cheese once. Now, in My Son the Waiter: A Jewish Tragedy, he brings us the story of his failure, and it’s pretty delicious. As Mr. Zimmerman admits, a typical proud mom might brag about her son vacationing in the Caribbean or buying a big, new house; his mother has to tell her friends, “If all goes well, Brad is buying a bookcase.” The low-key Mr. Zimmerman, who waited tables in New York for almost three decades while planning to become a famous actor, proves in this solo show that we have yet to hear every variation on a would-be actor’s struggles or a Jewish mother’s disappointment. His topics are a mix of the familiar and the mordant, with jokes about plane travel, supermodels on talk shows, his uneventful love life, a reality-show concept that involves a Kardashian and a sniper, and how gentile mothers react when their sons have to break dinner dates with them (“O.K.”).