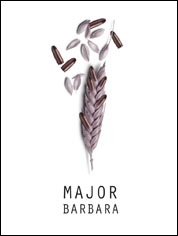 100 years after its premiere on Broadway, “Major Barbara’s” examination of government funded war and the nature of power stands the test of time. In this comedy, George Bernard Shaw pits Salvation Army officer Barbara against her armaments manufacturer father, and questions how human dignity and even faith can be bought.

There is no Salvation Army center in Brooklyn Heights, but this month you can hear a few of its soldiers beating drums and banging tambourines at the First Unitarian Church on Pierrepont Street. The Brave New World Repertory Theater, dedicated to performing new and classic plays in Brooklyn, has recruited the chapel to stage George Bernard Shaw’s “Major Barbara,” about a Salvation Army officer (Grace Rao) and her munitions-manufacturer father (David Frutkoff). This 1905 play, seen in a spirited revival by the Pearl Theater earlier this season, pits Barbara’s “blood and fire” against her father’s “money and gunpowder.” The fight isn’t exactly a fair one. Shaw tends to give one side all the best arguments, though renewed fears over terrorism and nuclear capability suggest that those arguments could use fresh scrutiny.