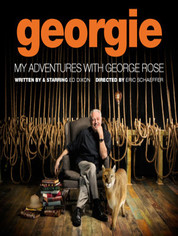 In Georgie: My Adventures with George Rose, Ed Dixon recounts his own tale of how he came to know and admire two-time Tony® Award-winning character actor George Rose (The Mystery of Edwin Drood, My Fair Lady, The Pirates of Penzance) over a twenty-year friendship until the unimaginable changed everything. Georgie: My Adventures with George Rose, directed by Eric Schaeffer, received its world premiere at The Signature Theatre in Arlington, Virginia, in January 2016. This roller coaster ride of a show captured audiences in Washington like none other, and the critics raved: “A stunner! He tells juicy stories with impish delight,” said The Washington Post, while DC Metro Theatre Arts simply stated, “Deeply profound. A delightful story about a great actor and a flawed human being. It will linger with you after the lights go up…I will never forget it!” DC Theatre Scene declared “FIVE STARS!…See the hilarious and riveting Georgie to laugh until you cry and cry until you laugh.” BroadwayWorld Washington exclaimed, “Dixon’s talent is remarkable. A powerful and passionate production.” and The New York Times stated, “Mr. Dixon morphed from one character to another, delivering incisive impersonations and well-timed punch lines.”

The New York premiere of the critically acclaimed Signature Theatre production of Georgie: My Adventures with George Rose, the new play written by and starring Ed Dixon (Sunset Boulevard, Les Miserables) with direction by Eric Schaeffer (Follies, Million Dollar Quartet), opens tonight, February 1, 2017, for a limited engagement through April 15, 2017 at The Loft at The Davenport Theatre (354 West 45th Street, between 8th & 9th Avenues). It has been said that theatre at its most basic is great storytelling. Georgie: My Adventures with George Rose is an exhilarating story, and indeed brilliantly told. Two-time Tony Award-winning character actor George Rose (The Mystery of Edwin Drood, My Fair Lady, The Pirates of Penzance), a bon-vivant with a flair for the dramatic and the eccentric, starred on the Broadway and London stages alongside luminaries like Katharine Hepburn, Noel Coward, Dame Edith Evans, Richard Burton, and Laurence Olivier in a storied career that met an unexpected end.

In recent years Ed Dixon—actor, writer, composer—has delivered two of the most wrenching literary stomach punches I’ve ever received: punch one with his autobiographical memoir, Secrets of a Life On Stage… and Off, which I read a few years ago, and punch two with his incandescent performance in his play Georgie, which just opened at The Loft at the Davenport Theater. In both cases, the punch was swift, unpredicted and straight to the gut .

If you are a theater fanatic, you know who George Rose was. If you were alive and going to New York theater in the 1970s and ’80s, you may have even seen him radiating contagious joy in My Fair Lady, as the saucy Alfred P. Doolittle relishing the prospect of “a little bit of luck.” Or matching wits with Kevin Kline in The Pirates of Penzance. Or winning his second Tony Award as the M.C. in The Mystery of Edwin Drood, his final show.