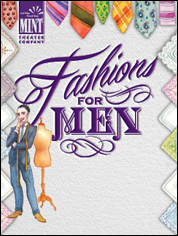 “Fashions for Men” is a comedy of character by Ferenc Molnár, set in a high-class haberdashery in Budapest (serving both men and women). The shop’s owner, Peter Juhasz, is a saintly beacon of decency who only sees the good in everyone—making him easy prey for the sinners who surround him. When his wife steals his last dollar and runs off with his top salesman, Peter is on his own, facing bankruptcy. Will he wise up and learn to protect himself from those who would take advantage of his goodness? Or will he persist in seeing the world through the rose-colored lens of his own compassion?

Tall and stately, the elderly woman leaned on a cane, heading down in the elevator after a matinee of Ferenc Molnar’s “Fashions for Men” at the Mint Theater. “When I was in high school, Molnar was the hottest thing going,” she told her companion. It’s been a while. The Broadway heyday of Molnar, a Hungarian playwright, stretched from the 1920s to the ’40s, when Rodgers and Hammerstein adapted “Carousel” from his drama “Liliom,” about a brutish barker at a Budapest amusement park. “Fashions for Men,” a romantic comedy that came to Broadway in 1922, the year after “Liliom,” could hardly be more different. At its center is a man, Peter Juhasz (Joe Delafield), so tenderhearted and trusting that he has nearly run himself out of business. The customers at his high-end Budapest clothing store love him, just not enough to pay their bills. A gentle husband to his wife, Adele (Annie Purcell), he has failed to notice that she’s fallen in love with their lying clerk, Oscar (John Tufts) — and given him all their savings so they can start a new life together in Berlin.