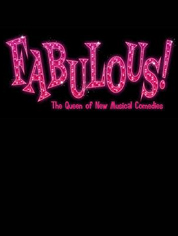 Fabulous! is an exciting new comic farce. Two female impersonators are coming off of a disastrous stint backing up the WORST Drag Diva in Paris. Now, they are both jobless and homeless. Suddenly, their salvation arrives in the form of a job offer from the Queen Ethel May, a cruise ship. They take the job, headlining as Fabulous Showgirls. The catch? They must keep their male identities a secret from everyone: the crew, the passengers, male suitors, etc. This, of course, results in some madcap adventures. In the tradition of Some Like It Hot, and Dames at Sea, Fabulous! The Queen of New Musical Comedies is where vintage musical comedy meets modern farce. It’s a laugh-a-minute, must see Fabulous night of theater.

The cold cream must have been flowing in the dressing rooms at Times Square Arts Center where Fabulous! The Queen of New Musical Comedies is percolating five times a week. The quick changes from drag to straight and back again must be exhausting for this hard-working, talented cast. But, all the effort is worth it. Fabulous, a slightly confused parody/pastiche musical is good natured, energetic and lots of fun. The program notes make it clear that the creative team wanted to create an homage to films like Some Like It Hot and shows like Anything Goes, but there are more than a few references to Gentlemen Prefer Blondes in the blonde vs. brunette lead couple and allusions to all the Shakespearean gender-bending comedies where suspension of disbelief comes with the package. A lot of suspension of disbelief—and good sense—is necessary to enjoy the hijinks of Fabulous which, literally, takes drag chorines Laura Lee and Jane on a voyage of self-discovery and romantic adventures. Stuck in a dreary show at the Merde Hole in Paris where the leading lady, Soufflé gets shot, Laura Lee (Nick Morrett) and Jane (Josh Kenney) decide to take a job on the Good Ship Ethel May which is taking its last crossing under the ownership of the total nitwit, Sir Alfred Dooalot (Cameron Lucas). On board are four supposedly talentless cruise staff members who are drafted by tough cookie, cruise director Sylvia (Jane Aquilina) to be her back-up chorus as she assembles a perfectly dreadful act. Sylvia’s plans are thwarted by the arrival of Jane and Laura Lee whom she harasses with the help of her scared stooge Stewey (Owen Wingo) whom she blackmails into doing her dirty work. Meanwhile a brother-sister team of thieves (Natalie DePuy & Bryan Seastrom) illegally boards the Ethel May in search of a diamond necklace which Laura Lee has stolen from Soufflé and they, too, get caught up in romantic confusion that is the Ethel May. Too complicated? Just wait…there’s more: Handsome Hollywood leading man Rock (Adam Kemmerer) shows up, revving up the hormones of virtually every man and woman on board. But, Rock harbors secrets of his own as he finds himself attracted to Jane, which is odd considering he is gay. And so the silly plot turns and turns, helped along by the zippy, period-perfect songs by Dan Derby (book and lyrics) and Michael Rheault (music) and Mary Lauren’s delightfully dippy choreography.

Fabulous! is a big, corny, messy, shabby, silly queen of a show, and it’s often a lot of fun. A high-heel–stomped mash-up of Anything Goes, Some Like It Hot and Gentlemen Prefer Blondes, written from a Hasty Pudding recipe and peppered with barely-double entendres, it is unabashedly nostalgic for a bygone time when Broadway musicals asked you only to check your cares and your brain at the door. Dan Derby’s libretto finds a pair of female impersonators—the shameless Laura Lee (Nick Morrett) and the plaintive Jane (the excellent Josh Kenney)—passing for biological gals on a luxury liner manned by, among others, a ferocious lesbian cruise director (Jane Aquilina, admirably wild-eyed) and a helium-loafered four-boy crew. Also on board: a movie star (the hunky Adam Kemmerer)! Best not to think about the twists that ensue in the overlong plot, and just give yourself up to the familiar zip of Michael Rheault’s melodies, the daffy spirit of musical comedy and the kick of watching twinky sailors girly-man the decks.

Twice, I thought I saw Patti LuPone onstage. They were just look-alikes, but Fabulous! The Queen of New Musical Comedies, which occupies the microscopic stage at the New Write Act Repertory Theater, has its fair share of other divas. Fabulous! is a little bit Some Like It Hot, a little bit Anything Goes and a lot of good-natured gay farce. Two best-pal drag queens, Laura Lee (Nick Morrett) and Jane (Josh Kenney), are offered jobs entertaining on a cruise ship, as long as they pretend to be real women. Those on board include a lovable gangster (Ty Pearsons) and his pushy blond sister (Adena Ershow), in cahoots to steal a diamond necklace; Rock Henderson (Adam Kemmerer), a movie star who is supposed to be incognito but keeps loudly announcing his name; the aristocratic bachelor captain, Sir Alfred Dooalot (Cameron Lucas), who hasn’t done a lot; and an unglamorous employee, Sylvia Smothers (Jane Aquilina), who used to be a prison matron. Rock is thrilled to find himself falling in love with Jane, because it must mean he’s straight after all. Everyone else — the gangster, the captain and Sylvia — lusts after Laura Lee, a sturdy blond singer who believes polka dots are slimming. These feelings lead Sylvia to declare herself a lesbian in what may be the show’s most winning number, “I Feel Romantic.” There are more gender misperceptions and revelations to come.