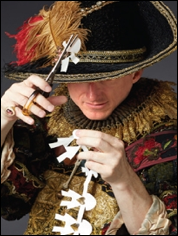 Molière’s lampoon of the Don Juan legend sees Heaven and Earth coming together in an outlandish partnership to seal the fate of one deliciously unrepentant rascal. This world premiere adaptation leads a madcap journey by land and by sea in which our “hero” lies, cheats, blusters, and seduces his way across the world—much to the dismay of his honest but dim servant—in an effort to escape his blushing bride’s outraged family. But there’s an unearthly surprise waiting at the end of the road…

What becomes a legendary scoundrel most? In Jess Burkle’s larkish, winking new adaptation of Molière’s “Don Juan,” directed by Hal Brooks at the Pearl Theater Company, the title character has cascading blond locks, legging-tight metallic pants and a codpiece that could put an eye out. With a fringed biker jacket, wings sprouting from the shoulder blades, the look (by Anya Klepikov) suggests that Don Juan follows his own rules in fashion as well as love. But if it seems as if the handsome seducer were dressed in a different century from the people around him, that’s emblematic of the disjointedness of this show, which unfolds on a good-looking set (by Harry Feiner) strewn with overgrown remnants of Classical architecture, surrounded by contemporary walls. By reframing Molière in modern, colloquial language, Mr. Burkle means to bring “Don Juan” closer to us and have a bit of fun. He succeeds only intermittently, though Mr. Brooks’s production gets one important element absolutely right. Justin Adams plays Don Juan as a comic embodiment of everyone’s awful ex: a beguiling, strutting, sneering bad boy whose capering heart reliably turns to stone the morning after.