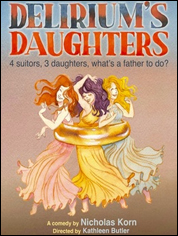 In Delirium’s Daughters, a kind old gentleman believes his deceased wife has forbid their three daughters to marry, until one of the suitors plays a series of tricks that helps him deal with his loss and recover his sanity. The show is a kindhearted farce based on the Italian Commedia Dell’Arte, with a touch of magical realism.

Things turn complex and lovely when the ghost appears in “Delirium’s Daughters.” It’s not a real ghost. Giovio isn’t dead; he has cleverly faked his own demise so that everyone will think kindly of him, especially his girlfriend’s father, who has rejected him as a prospective son-in-law. So he visits the man in the middle of the night. The father, Signore Di Lirio (Branislav Tomich), is accustomed to talking to dead people. His wife has been gone for three years, but he refuses to admit that and often goes offstage to confer with her. She is the one, he announces, who has decided that none of their three daughters are old enough to marry. Nicholas Korn’s one-act comedy, presented by Triumvirate Artists at the Clurman Theater on Theater Row, claims commedia dell’arte as its inspiration. Certainly it goes for the form’s reliance on stock characters: The young women’s suitors are the glum Serio (Evan Zimmerman), the sweet wimp Timidio (Brandon Beilis) and the arrogant fop Pomposa (Jackson Thompson). The amiable Giovio (Nick Bombicino) is an extra gentleman caller, determined to win the youngest girl, Celia (Kerry Frances), from Pomposa.