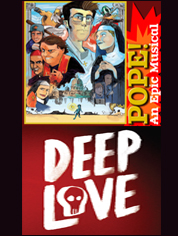 DEEP LOVE: A GHOSTLY ROCK OPERA is a story of love, loss, and indecision where sweethearts become adversaries in pursuit of what they cannot live without. Told entirely through continuous, haunting rock and roll, DEEP LOVE features Jon Peter Lewis from American Idol, his bandmate from The Voice Ryan Hayes (of the group Midas Whale), and Amy Whitcomb from The Voice and The Sing-Off. Heartwarming and heartbreaking, it promises to delight all ages. Audience members are encouraged to come dressed in their best funeral attire. POPE! AN EPIC MUSICAL is an award-winning musical comedy of heroic proportions. It tells the tale of a young, idealistic, rock-star Pope, and his ambitious nemesis, the Archbishop, who will stop at nothing to wear Pope’s mitre. In this comic book world, the papal masses are charmed at first, but Pope soon learns that a few well-placed enemies can overpower a few million fans. When the tyrannical Archbishop sweeps in and seizes power, the world cries out for a hero…and only Pope can answer the call! Good and evil collide in this rambunctious, Shakespearean power struggle where lines must be drawn, sides must be taken, and confrontations must be musical!

Has your deceased beloved adopted a telltale moniker along the lines of Old Bones? Are his new friends writhing, leaping creatures whose gossamer garments have a certain shroudlike quality? Has he taken to menacing you from beyond the grave?n Yes to all? It’s time then, dear, to stop hanging around the cemetery, leaving those love notes and bouquets. You can do better! Evidently no one has mentioned this to Constance (Melanie Stone), the young widow in the guitar- and saxophone-driven “Deep Love,” by Garrett Sherwood, Ryan Hayes and Jon Peter Lewis, an offering at the New York Musical Theater Festival. When Constance’s sad heart stirs for Friedrich (Mr. Sherwood), who has a tormented indie-rocker vibe and a slightly sandpaper voice, Old Bones (Mr. Lewis, a veteran of “American Idol” and “The Voice”) threatens them both, and still she won’t tell him it’s over.