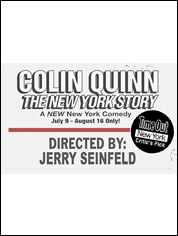 In “Colin Quinn The New York Story,” Colin bemoans the rise and fall of his hometown, the city formally known as NY, from its modest beginnings as Dutch outpost to the hipsters of modern Williamsburg to the vermin below and above ground. Quinn is once again at his satirical best, taking aim at the prejudice, paranoias, and peculiarities that make New York City the crossroads of the world. Based on Colin’s best-selling book, “The Coloring Book.”

When I worked at Time Out New York in the late 1990s, visitors to the office were greeted by an ad poster saying: “Welcome to New York. Now Get Out.” It made me roll my eyes. That the famously obnoxious New York attitude was being used to sell magazines was, to a snarky young guy steeped in the cultural critiques of The Baffler, just one more example of the Disney takeover of the city. Just as theater is always dying, New York is perpetually over. Complaining about its demise, however, remains one of its wonderful traditions, and Colin Quinn, a comic alert to ritual, plants himself firmly in the middle of it in his new monologue, “The New York Story,” a nostalgic lament that makes for a lovely summer evening. His set (designed by Sara C. Walsh) displays an affection for the past, with clotheslines and fruit crates. Mr. Quinn grew up in Park Slope, and his relationship with the city is covered in his new book, “The Coloring Book,” the inspiration for this show. At the start, he hops on a stoop and argues that tourists come here not for the sights, but for the energy, the personality, the “now get out.”