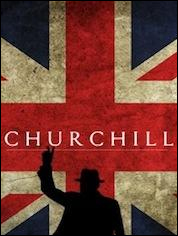 Prepare to meet Winston Churchill. The former British Prime Minister made his mark in history as a Nobel Prize winner, respected politician, and one of the greatest leaders the world has seen. But in March of 1946, he has just lost an election, is in forced retirement, and everything he has fought for is threatening to slip through his fingers. When he receives an invitation from United States President Harry S. Truman to speak in Fulton, Missouri, he rediscovers his strength in a speech that impacts the world forever. Following a sold-out, critically acclaimed run in Chicago, Ronald Keaton brings Winston Churchill to life in a provocative, heart-warming, and hilarious tour de force performance that reveals the man behind the legend.

For lovers of British history onstage, this is a season bristling with enticements: Elizabeth II, in the form of Helen Mirren, holding court in The Audience; Thomas Cromwell and Anne Boleyn, soon to follow in Wolf Hall; and over at New World Stages, a chatty Winston Churchill, dabbing at oils at his easel and expounding on an action-packed career. His youthful exploits in India, his dramatic escape from captivity during the Boer War, his alarm and revulsion as Europe appeased a rising Adolf Hitler, his relief when the United States entered World War II — it’s all there in SoloChicago Theater’s Churchill, a one-man show adapted and performed by Ronald Keaton. A biography in two acts, Churchill is lecture as entertainment. The year, evidently, is 1946, and the former prime minister, freshly jilted from office by a war-weary populace, is visiting the United States at the invitation of Harry S. Truman. Why he’s speaking to us, or where we’re meant to be, is unclear, but he’s pleasant company, an older gentleman well aware of his bounteous good fortune.