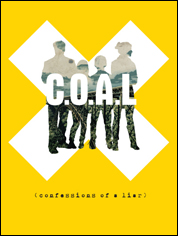 Lies, lies, lies! There are lies we tell ourselves and lies we tell others – lying just to make it through the day. A charming and witty liar, Coal, revisits his early life in a small West Virginia town introducing the colorful, dicey and unsavory characters of his past. Along the way, he attempts to come to terms with the whoppers he has told to whitewash his painful truth. A singular character portrayed by Man, Woman, Girl, and Boy, Coal finally tells us the daunting tale he has never been able to share.

When Tommy Maloney, a cocky first grader, mentions his $10-a-week allowance, Coal announces that he gets $100. And not only that, little Coal adds: “My dad is a pirate.” You have to wonder at first whether the story in David Brian Colbert’s “C.O.A.L. (Confessions of a Liar),” at 59E59 Theaters, is going to be told on a juvenile level. But it turns out to be quite grown-up. And Tommy Maloney plays a sad, crucial role. It’s all too familiar a story in its essence. Boy is raised by a falling-down alcoholic father who considers his welfare checks his right, and a timid, churchgoing mother who can’t explain how Jesus can be hurt by Coal’s bad behavior if he died a long, long time ago. Boy becomes a chronic liar, expressing his rationale, as if addressing whoever has just caught him in the deception: “I was convinced I knew what you wanted me to say.” Boy finds something he can do well — he becomes a star on the school swim team — but during his first out-of-town competition, the nice-guy coach, a respected husband and father in the community, shows his affection in unwanted ways. The abuse goes on for years.