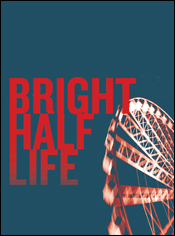 Bright Half Life is a new play by Pulitzer Prize nominee Tanya Barfield and directed by Tony Award nominee Leigh Silverman. Starring Rebecca Henderson (Appropriate Behavior) and Rachael Holmes (Ruined), the play is a moving love story that spans decades in an instance from marriage, children, skydiving and the infinite moments that make a life together.

Erica and Vicky like to play a game of questions that they call “A B C”: “What’s your favorite color?” Vicky asks. “If you had a superhero power what would it be?” “Do you think forwards or do you think backwards or do you think just ‘now’?” The answer to that last one is absolutely all of the above. Tanya Barfield’s Bright Half Life, a Women’s Project Theater production, follows Vicky (Rachael Holmes) and Erica (Rebecca Henderson) through four-and-a-half decades: introduction, courtship, children, same-sex marriage, not-so-gay divorce and the whisper of mortality. But this brief, prismatic play doesn’t proceed linearly. It flashes forward and falls back and sometimes repeats the same scene twice. As scripted by Ms. Barfield and directed by her frequent collaborator Leigh Silverman, the logic is mostly associative. When Erica’s proposal is rebuffed, the scene speeds to an early date, when she suffers heartburn. A moment just before a sky diving free fall abruptly shifts to a different kind of collapse. A fight glides into a kiss.