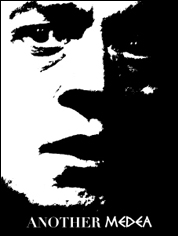 The battle between Jason and Medea has been told and retold, but never quite like this. Another Medea tells the story of the incarcerated Marcus Sharp. The one time New York actor recounts in gruesome detail how his obsessions with a man named Jason and the myth of Medea lead to horrific, unspeakable events. Writer-director Aaron Mark describes the eighty-minute solo show as “Grand Guignol horror in the style of Spalding Gray.”

For someone who murdered his own children, Marcus is really rather charming. Aggrieved, yes, and determined to tell his side of things, but not bad company. He understands that he’s committed a horror. “But horrific things do happen in real life, and I think that’s the important thing to remember here,” he says. They also happen in classical tragedy, and this monologue, written by Aaron Mark, is called Another Medea. So it’s no spoiler to divulge that Marcus, a New York actor who abandoned his tepid career when he fell blissfully in love with a wealthy doctor named Jason, turned homicidal after Jason left him. Played with great suppleness by the handsome, silver-haired Broadway veteran Tom Hewitt (Jesus Christ Superstar), Marcus is a disarming psychopath. He recounts for an unseen visitor the events that led to his incarceration, and in this darkening tale, we watch his life unravel.