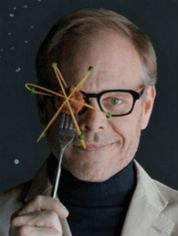 In Alton Brown Live: Eat Your Science, fans can expect comedy, talk show antics, multimedia presentations and music (yes, he sings), but Brown is adding a slew of fresh ingredients including new puppets, songs and bigger and potentially more dangerous experiments. Brown has a knack for mixing together a perfect base of science, music and food into two hours of pure entertainment. Critics and fans rave about the interactive fun when Brown invites an audience member on stage to serve as his assistant. According to Alton, “there will be plenty of new therapy inducing opportunities during our audience participation segments. I don’t want to give too much away, but we’re also going to play a little game with the audience,” says Brown.

If Alton Brown, the Food Network celebrity, offers you a cocktail, refuse it. Maybe you are parched. Maybe you are in alcohol withdrawal. Maybe you have thought that clinking glasses with the host of “Good Eats” and “Cutthroat Kitchen” would be a fine thing. Even so, don’t do it. Never forget that this is the man who coined the term “evilicious.”