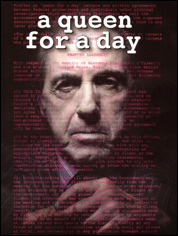 Set in an abandoned warehouse, Giovanni (David Proval) is a respected “made-man” forced into a difficult position. Torn between love, loyalty and survival, he is asked to give up his crime boss brother, as part of a one day immunity deal also known as a “Queen for a Day.” Michael Ricigliano Jr.’s new play, A Queen for a Day offers a glimpse into a world where loyalty is prized above all and there is nothing anyone would not do to protect their family.

Tony Soprano had to go to a psychiatrist for us to hear about his personal problems. In “A Queen for a Day,” Michael Ricigliano Jr.’s high-strung one-act drama at the Theater at St. Clement’s, the secrets come pouring out at a clandestine meeting inside an ugly warehouse on a Sunday morning when Nino Cinquimani (David Proval), a made man, would rather be at Mass. What we have here is inherent intensity. Nino’s lawyer, Sanford Weiss (David Deblinger), has persuaded him to meet with a federal prosecutor, Patricia Cole (Portia). The stated deal is that if he can give Patricia enough useful information about his crime family, he may avoid prison and even start a new life in witness protection. Sadly, the man they really want information on is Nino’s brother, Pasquale.