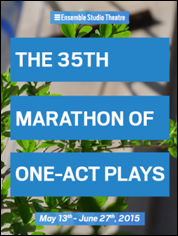 In just two hours, Series A of the Ensemble Studio Theater’s “35th Marathon of One-Act Plays” races from Manhattan to Brooklyn, from a port town in Kenya to the capital of Idaho, from the 1950s to right now. A collection of short works, most Ensemble regulars, this speed-trial evening emphasizes how difficult it is for theater artists to work in miniature and how satisfying when they succeed. The tidiest and most effective play of the series, Chiara Atik’s “52nd to Bowery to Cobble Hill, in Brooklyn,” is also the speediest. On a rainy night, two female friends who aren’t really friends (Megan Tusing and Molly Carden) share a cab. Nothing much happens, but Ms. Atik, who used the short form to excellent effect in her recent “Five Times in One Night,” nails the rhythms and preoccupations of contemporary urban conversation. The director, Adrienne Campbell-Holt, helps the actors find believable relationships and cadences. Will Snider’s “The Big Man,” directed by Matt Penn, centers on an American working in Kenya (Gianmarco Soresi) who is pleading with a couple of cops (Brian D. Coats and Ray Anthony Thomas) to return his truck. Mr. Snider provides some local detail and has a fine way of reversing expectations, although the final U-turn actually circles back to a conventional narrative, in which seemingly unsophisticated men show a know-it-all how little he actually knows.