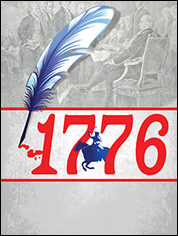 Ring in the election year with “1776,” the classic Tony Award-winning musical about how the founding fathers drafted the Declaration of Independence and gave birth to a new nation. A unique show that presents John Adams (Santino Fontana), Thomas Jefferson (John Behlmann), and Benjamin Franklin (John Larroquette) in all their fractious, fascinating complexity, “1776” features beloved songs such as “Sit Down, John,” “Cool, Cool, Considerate Men,” and “He Plays the Violin.” The Encores! production will remind you of how far America has come—and how little we’ve changed.

Even in times of tumult, history moves at different paces. To see the hit Broadway musical “Hamilton” is to experience the American Revolution as a hotheaded, hotfooted affair, sped forward by impatient firebrands who act as fast they talk. But take a look at the same era as it’s portrayed in “1776,” the 1969 musical by Sherman Edwards and Peter Stone about one excruciatingly protracted session of the Continental Congress in the year of its title. As Garry Hynes’s stately Encores! concert production of that show reminds us, the birth of great change often involves a slow and difficult labor, especially when a hidebound institution called Congress is involved. Consider the opening lines of this production, spoken with deliciously ripe disgust by Santino Fontana in the role of John Adams: “I have come to the conclusion that one useless man is called a disgrace — two are called a law firm — and that three or more become a Congress.” I don’t know how that definition played to audiences 40-odd years ago. But on Thursday night, when the production opened at City Center, it brought the house down. Adams goes on to sing, in further describing the august body he serves, “You see/we piddle, twiddle and resolve/Not one damned thing do we solve.”