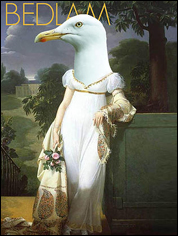 Played in repertory with ten actors, The Seagull and Sense & Sensibility are highly theatrical, immersive productions of classic stories by one of America’s most innovative downtown theatre companies.

Though Anton Chekhov’s The Seagull has always struck a chord with modern audiences, it can also sometimes feel distant and austere in productions that hew faithfully to literal translations. The Bedlam Theater Company, a troupe known for innovative takes on classics such as Hamlet and Saint Joan, has given strong new wings to this play about unsatisfied love and unfulfilled dreams at the Sheen Center. Eric Tucker, one of Bedlam’s founders, directs and stars in a riveting, emotionally charged production that makes this play feel more relevant — and intimate — than ever. In Anya Reiss’ new adaptation, the play’s setting is still the country home of retired government worker Sorin (Stephan Wolfert), but his estate is located on the Isle of Man in the present day rather than in 19th-century Russia. Struggling writer Konstantin (Eric Tucker) has written a play to be performed for Sorin’s guests, among them his mother, Irina Arkadina (Vaishnavi Sharma), a well-known actress. Konstantin’s attempts at creating a new form of theater fall flat, as does his love affair with Nina (Laura Baranik), an aspiring actress who eventually spurn’s Konstantin’s love and becomes infatuated with Boris Trigorin (Jason O’Connell), a famous writer and Arkadina’s lover. Few in this group of artists, intellectuals, and emotional misfits, including the perennially sable-clad Masha (Andrus Nichols), are destined to find happiness, especially Konstantin and Nina, whose ill-fated careers and love affairs lead them down destructive paths of madness and despair.

Others — led of course by the New York Times — have acclaimed Bedlam as a theatrical company of exceptional quality. See their latest productions of Chekhov’s The Seagull and a new adaptation of Jane Austen’s Sense and Sensibility done in repertory and you’ll immediately know why. They’re a strong ensemble with versatile actors and a keen intelligence devoted to the pure theater extolled by Cheek By Jowl and others right up the recent Peter and The Starcatcher. It’s theater that exults in the marriage of their talents and your imagination to create something special that needs no elaborate sets or frippery. The Chekhov is good (no small feat). The Austen is delightful and near masterful. And I will be certain to see whatever they do next. You know the stories. In The Seagull, a famed actress heads to the country for a rest, only to have her petulant son Konstantin throw a fit when she giggles at his “play” and her lover — a writer who, she believes, should be thrilled to have her — grows besotted with a much younger ingenue. Meanwhile, the son is the object of affection for Masha, a woman he cannot see while she in turn is stalked by an obdurately dull school teacher named Medvedenko who makes less than $2000 a year and has no source of conversation other than the injustice of such a thing. It does not end well.

Any stab at Jane Austen calls for heaps of subtlety and decorum—of which the scrappy Bedlam company, happily, supplies none. Theirs is a rowdy, exuberant rendition of the Austen novel, thoroughly modern yet not at all contemporized. Kate Hamill’s felicitous adaptation gives us ageless emotions, couched in the mores and locutions of the past, yet timeless in their arduously suppressed intensity. As in most of Austen’s work, the plot pits nobility of spirit versus financial strictures. Elinor Dashwood (played by company cofounder Andrus Nichols with a De Havilland–style mix of spine and vulnerability) is the eldest of three sisters left penniless at the death of their father, whose estate was entailed to the male issue of an earlier marriage. Dashwood Jr.’s wife, the greedy Fanny (deliciously acidulous Laura Baranik), nixes her husband’s promise to help out his suddenly impoverished half sisters, essentially abandoning them to the mercy of distant relations. Fanny, proactive as she is sharp-eyed, also manages to put the kibosh on a nascent attachment between her shy, bookish but financially secure elder brother (Jason O’Connell) and the compatibly high-minded Elinor. Upon Fanny’s insulting insinuation that Elinor is seeking a “catch,” her mother (stalwart Samantha Steinmetz) removes her penniless brood to a country cottage, where they come under the care of a hunt-loving country squire, Sir John Middleton (Stephan Wolfert, in full chin-receding, hup-hup mode), and his matchmaking-minded mother-in-law, Mrs. Jennings (Eric Tucker, acting as well as directing).

Gossip gallops in Bedlam’s invigorating stage version of Jane Austen’s Sense and Sensibility, which runs through Dec. 21 at the Sheen Center. The would-be and might-have-been lovers in this enchantingly athletic take on the perils of Austen-style courtship, adapted by Kate Hamill and directed by Eric Tucker, find themselves pushed and pulled by the forces of speculation run rampant. Why, a young woman can’t take tea with a friend without feeling that prying eyes and ears are pressed against the walls and windows, a sentiment to which the ensemble gives literal and very funny life. An ever-rising Babel of voices sometimes overrides the dialogue. And the scenery, which turns out to be highly mobile, has been mounted on casters, since it takes a well-oiled set of wheels to keep up with the velocity of rumor. And you thought Jane Austen was all sedentary sitting around and sewing. No troupe in New York these days rides the storytelling momentum of theater more resourcefully or enthusiastically than Bedlam. Last winter, using a cast of only four, this company performed Shaw’s Saint Joan and Shakespeare’s Hamlet in repertory (also under Mr. Tucker’s direction), with an engrossing energy and narrative ingenuity that made these wordy, worthy dramas feel like suspenseful Olympic events. After that, you might think that Mr. Tucker and his producing director (and frequent leading lady) Andrus Nichols would retire to a spa for a year or two. But here they are again, fewer than 12 months later, alternating high-octane Austen with a loose-jointed production of Chekhov’s The Seagull, a play notorious for thwarting the most accomplished thespians.